A Table for Stewart and Julie

Posted on Jan 25, 2023 by Philip Hultgren in Uncategorized | 0 comments 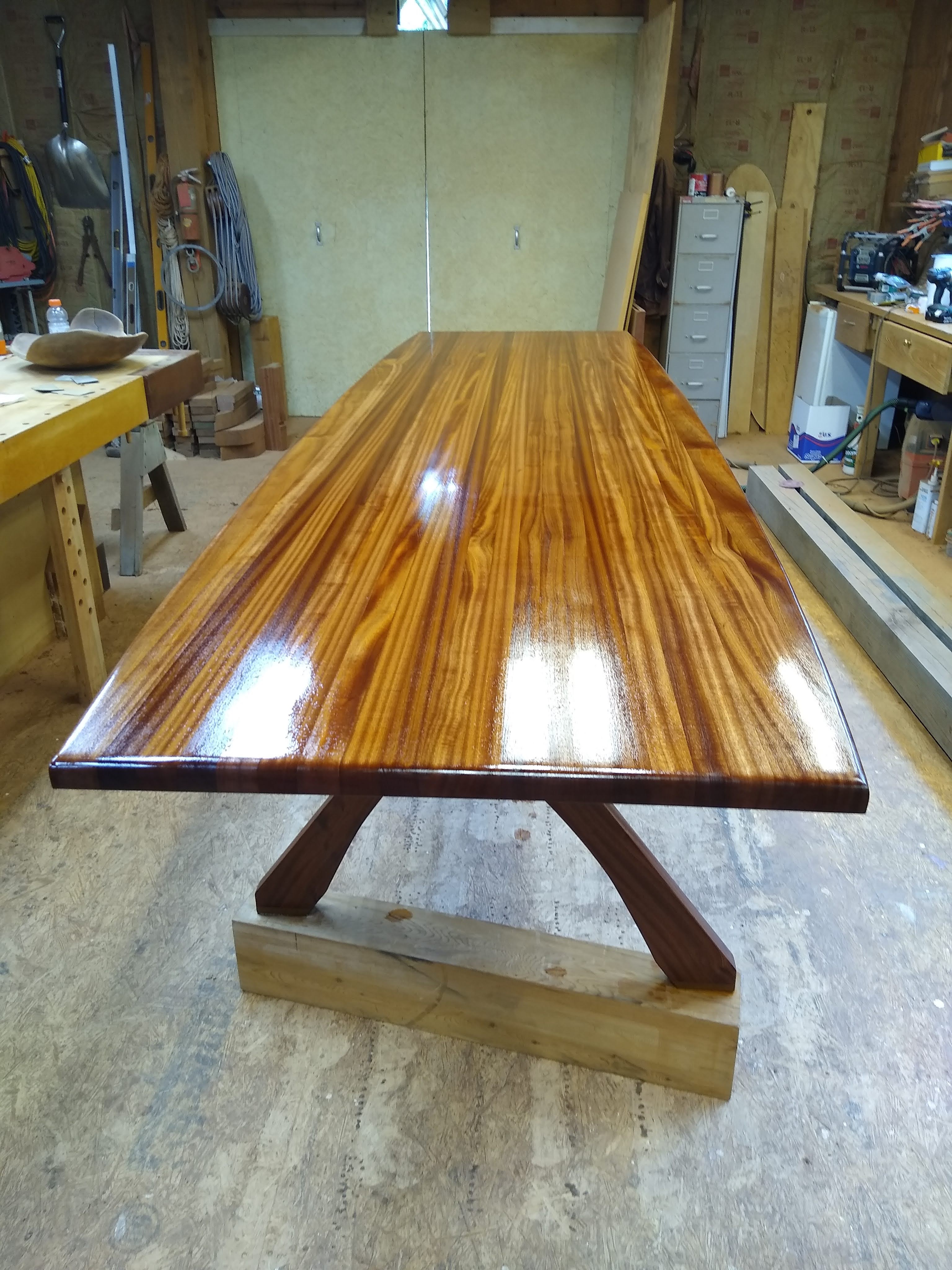 A local contractor asked my advice on which was the best wood to use for a dining table that would be exposed to the elements all the time. The only covering over the table was a pergola. I suggested Mahogany, with the proper finish, rather than Ipe or Teak. Mahogany has been used for bright work on yachts for decades and, on a boat it is exposed to the elements continually. He then asked if I would make the table.

Stewart and Julie wanted a large table – twelve feet long and four feet wide. I showed them a picture of the table I had made for Dick and Sherry and they really liked my leg design so I knew what I needed to do.

It is the nature of wood to move – to swell and shrink – and that needs to be taken into account in any design. Leaving a board of 3” or wider of any length exposed to the elements, especially sun, will result in what is known as “cup”. The outer edges will curl up, sometimes a lot. Anyone with a wood deck knows this. It doesn’t matter if the direction of the rings at the end of the board are curved up or down. What is at issue is the loss of moisture mostly through radiant heat on the top and no loss on the bottom of each board. Because of that loss of moisture, the top of the board shrinks and the bottom of the board does not and a “cup” is the result.

In order to minimize this effect, especially in a table so wide, the size of individual boards and direction of the growth rings on those boards is key. I cut the wide boards into 2” strips and then turned the strips on edge (90 degrees) to glue them. The growth rings at the end of the strips were then oriented vertically. I glued together 22 pieces of Mahogany 12’ long.

Once the glue was cured I planed the top by hand, first using the roughing plane which leaves a neat pattern on the surface.

I then used the jack plane and then the smoothing plane. Once it was flat I scribed a very slight curve from the end toward the center and cut it with my hand-held bandsaw. I find that just a slight curve makes the appearance much more attractive.

I then flipped the slab over and repeated the process so now the bottom was up. Next I marked a line 5” from the edge all around. From that line I tapered the thickness by just one quarter inch. I then laid out the locations of the leg connections.

The connections are made of 4” square steel pipe that I welded to ¼” plate. I drilled holes for ½” bolts that would go through the legs and the steel. The plate was then attached to the table using wood screws. I also had to consider water contact at the bottom of the legs. Even with the top covered, in a heavy rain storm water would run under the table and possibly surround the legs resting on the patio. End grain tends to soak up water and swell. To lessen the water absorption in the end grain of the Mahogany I applied a 1-inch-thick piece of Iroko to the bottom of the legs. Iroko is a wood like Teak that is very resistant to water absorption.

I applied 4 cross-braces to further stabilize the slab. I used corrosion resistant wood screws in slightly oversized holes that allowed for a small amount of wood movement.

The table now weighed in excess of 300 lbs. so I recruited some help and my chain fall to turn it over. I then began sanding the top. Once I made it through the sanding grits to 150, I checked carefully for scratches I had missed, marked them with a soft pencil and sanded them out. I then routed an edge, sanded that round-over and inspected again.

After clearing out as much dust as I could, I began the process of applying coats of finish. This finish is made specifically for bright work on yachts. It has very high concentration of UV inhibitors and so increases the life of woodwork that is exposed to a lot of sun. I applied five coats of finish lightly sanding in between coats.

A few months after I had delivered Stewart and Julie’s table I received a request for the same table from a guest who had eaten at their table.