Posted on Jan 15, 2023 by Philip Hultgren in Uncategorized | 0 comments 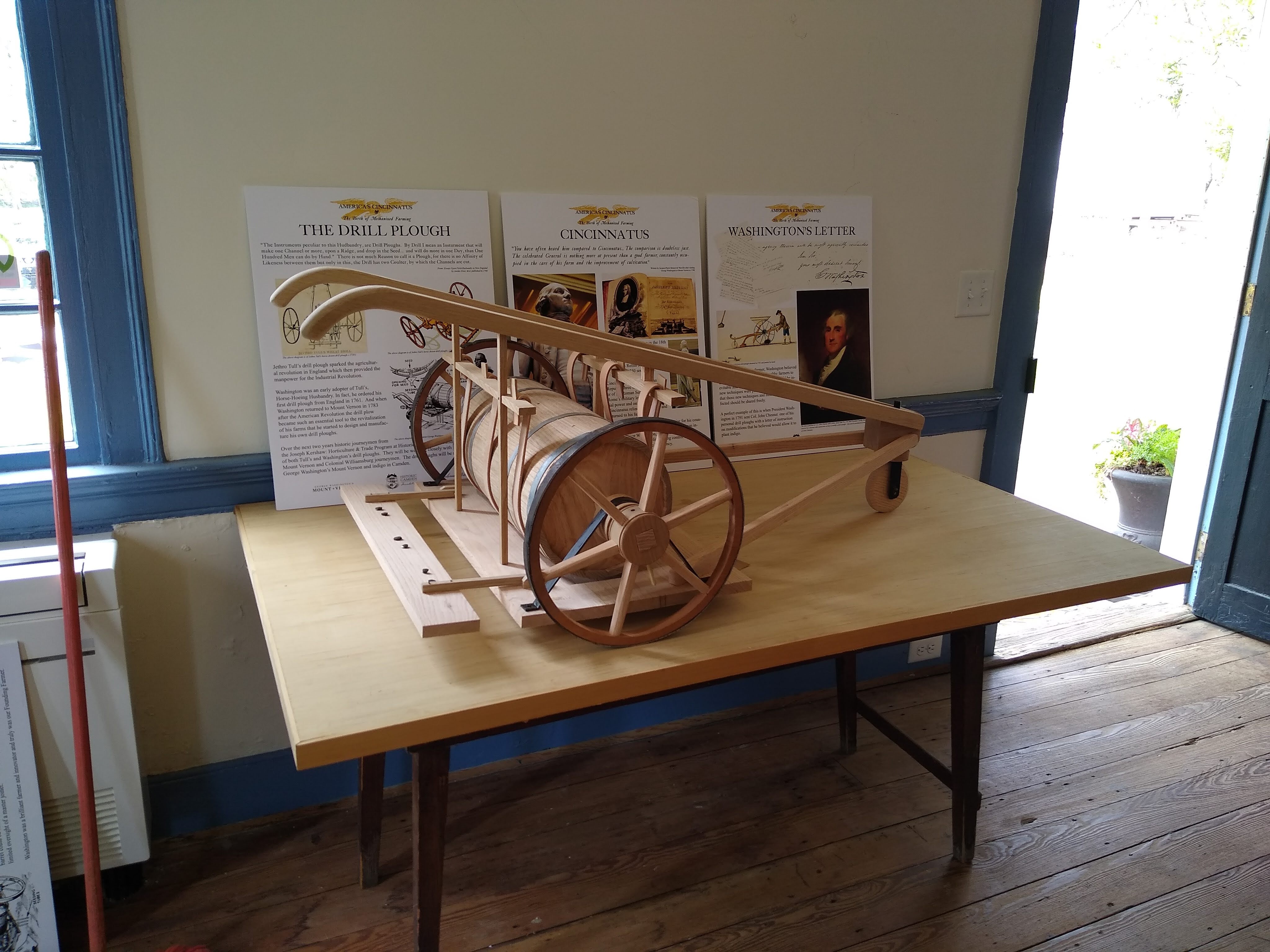 In 1791 President George Washington stopped in Camden, South Carolina during his tour of the southern States. Camden was the site of a battle in which the Continental army was soundly defeated. At a dinner hosted by Camden locals, he met with a local farmer/plantation owner named James Chesnut. Mr. Chesnut had approximately 6000 acres under cultivation, mainly Indigo. The result of the meeting between these two farmers was a gift from Washington’s own farm/plantation. This gift was a seed plow.

We need to recall that this was a time of subsistence farming. If a food crop failed it would mean the possibility of starvation. If the nation could not feed itself, it would not survive. Washington was acutely aware of this possibility. His own plantation was a mixture of fields of crops that would feed his needs and fields that were experiments, to see what was possible and/or practical.

Until the early 18th century, fields of crops were planted by sowing. That is, the seeds were broadcast by hand on a plowed field. The seeds were not covered with soil and so were subject to devastation by animals and the elements.

In 1701 Jethro Tull (yes, it really was his name) of England invented a wooden machine that would create a small furrow in the ground, drop a seed at regular intervals, and then cover that seed with soil. This was the first seed plow and foreshadowed the farming practices we know today as row cropping.

Tull’s seed plow was revolutionary and extremely complex. To make all the components of this plow the woodworking skills of a furniture maker or a scientific instrument maker (which at this time were mostly wood) needed to be employed.

Washington obtained one of Tull’s seed plows prior to the breakdown of relations between England and the Colonies and the ensuing Revolutionary War.

Washington took Tull’s idea and modified it with simpler parts that could be manufactured by slaves or back country jack-of-trades people. His plow still created a small furrow, dropped seeds at specified intervals and covered the seeds with a harrow (a rake). Washington’s design used a wooden cask to hold the seeds. All around the cask were holes in a line at a measured distance. Seeds would drop through the holes as the plow moved over the ground. Leather straps with a hole at the very bottom would keep the seeds from falling out prematurely.

Washington never applied for a patent wishing that everyone who wanted to make one was free to do so. Unfortunately, not applying for a patent also means that there are no drawings or detailed descriptions of his seed plow. We have a four-page letter that he sent to James Chesnut informing him that the plow is in transit and that Chesnut could modify it, if he wished, by making the cask wider to plant more rows with each pass.

The executive director of Historic Camden, Cary Briggs, asked me if I could fabricate a scale model of this seed plow based on what we know and with the few references we have. This half size model is the result of what I reasoned out.

Using simplicity as the main measure, I began with a square axel as was the common practice of the day. Instead of cutting the axel ends round where the wheel would attach, however, I left it square fitting into a square hole in the hub. Thus, the transfer of the wheel rotation to the axel would be direct and very positive. The cask has square holes in its heads and interior dividers positively turning with the axel.

The cask was divided into three chambers and the two interior dividers had to line up their square holes while the cask was being assembled.

I created round bushings that would rub on iron straps to support the platform holding the leather straps and the handles. The seeder would never travel very fast so there was no danger of the bushings overheating and both parts were simple to make.

The Blacksmith at Historic Camden made three small plows that I inserted on the front edge in line with the holes in the cask.

That left the harrow on the trailing edge. I learned the harrow board was hinged allowing the farmer to swing it up to facilitate easy clearing as it tended to clog up with grass/weeds/debris.

We will soon be building the full scale model and demonstrating its use at Historic Camden’s 18th Century Farm.