A Dining Table for John and Christian

Posted on Jul 15, 2021 by Philip Hultgren in Uncategorized | 9 comments 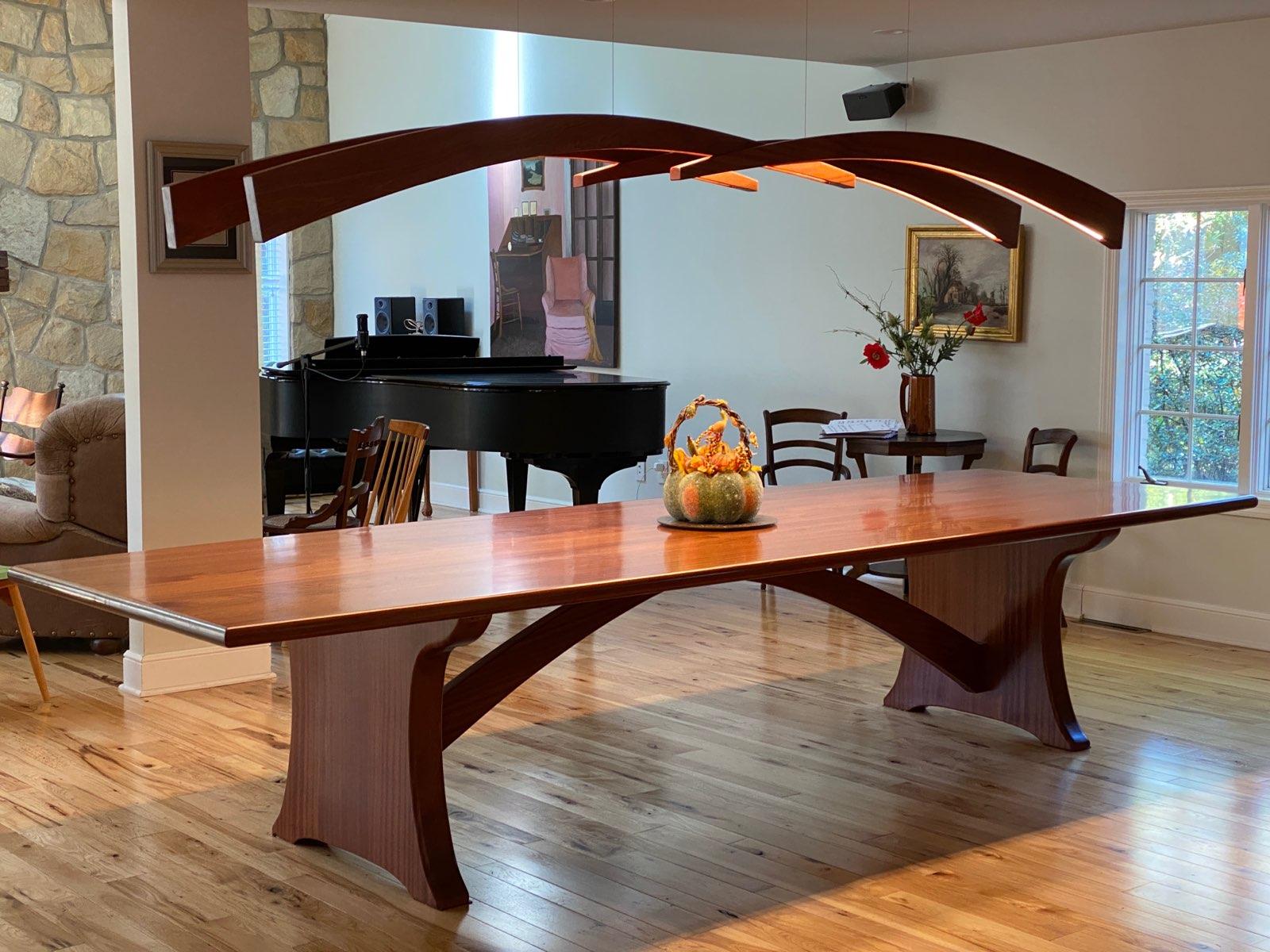 John and Christian love to have friends over for dinner. As the number of guests increased, they put two tables end to end to accommodate everyone. They then decided it was time for a new larger table but could not find what they were looking for ready-made. I had made them a trestle table years before (and it traveled the world with them), so they asked me if I would design and build them a 12-foot-long dining table. They asked me to be “artistic” so the pressure was on.

I made a model that displayed two different (very different) leg arrangements. Recognizing that this would be a very heavy table top, I stylized three triangles, which is one of the strongest building designs, at one end and a graceful curved “blade” leg at the opposite end.

They decided on the curved blade leg and chose Sapele as the wood for both its beauty and availability. I asked my local lumber dealer if he could source some 2 inch thick Sapele 14 feet long. The reason for asking for wood 2 feet longer than I needed is due to the common occurrence of checks (cracks) on one or both ends of a board, and since the ends were all exposed and polished there would be no way to hide a crack.

I looked through the complete stack of 14s and chose each board I would use for straightness and grain pattern. Even with a species like Sapele, which is known for its straightness and stability, there are boards that are cupped, twisted, and/or bowed and there might be checks mid-board. So I could not just pull the ones off the top and get to cutting. I had to be careful in my choosing.

First I cut all the boards for the top to 12’2” length eliminating any flaws, such as cracks, on either end. The next step was to mill all the boards until they were the same thickness with straight parallel edges. The boards I chose for the legs I cut into 3-foot lengths. The next step was to flatten one side of the board by pushing it across a long, smooth, cast iron table called a joiner. In the middle of this table four blades (called knives) are mounted lengthwise in what could be described as a rolling pin. These blades rotate very fast and shave off the downward facing humps on the board as I push it from one end to the other. I may have to push it over the blades 3 or 4 times to shave it relatively flat. This is very physically demanding work since each board weighs between 70 and 90 lbs.

With one surface flat, I began using the thickness planer. This machine shaves off the top side of the board perfectly parallel with the bottom side. The finished product from this planer is a board of equal thickness from one end to the other. It has drive rollers that pull the board through at a constant feed rate so, unlike the joiner, I do not push it to get it to cut.

Once I had flat boards of equal thickness, I could turn my attention to the edges which are still rough cut and uneven. The joiner again came into play. I turned the board up so one edge would be shaved off by the blades. The operation is simple in and of itself, but this was a 12’ long 8” – 10” wide board still weighing north of 60 lbs. Wrestling more accurately describes this process. Additionally, the joiner, as big as it is, has an infeed table 4’ long. That means 8’ of board was hanging off the edge when I started and when I finished at the opposite end. So I built a table that would support that 8’ of hanging Sapele as I carefully pushed it over the cutters and rollers at the out feed end to support it on the back end. It seems simple enough except that all three parts need to be perfectly flat, not necessarily level, but flat. Flat for 22’.

Only one edge needs to be joined flat. The table saw was next up in the process of making these boards square. I slid joined flat edge of the board along the fence and the saw cut the extra wood off the opposite edge creating parallel edges. Sharp blades are essential at all stages of the cutting of wood and a sharp saw blade is no exception. It is the difference between fighting to get the wood cut (and burning the cut in the process) and having very little resistance to your push (and thereby more control).

Next the boards had to be glued together to create the table top and to create the legs. It is very difficult to glue and straighten and clamp more than one joint at a time especially on a 12 foot length.  As one might expect, the more boards I glued together, the heavier it got. There were only 6 boards across, but 3 boards glued together was 24” wide and very heavy. I asked my friend Dennis to help with the final two pieces.

I glued the legs double thick and shaped them so that when someone sat where a leg was, they did not bump the table leg with their knees as per the request of John and Christian. I attached the legs to the underside of the table by means of bed-rail hooks. These are nifty bits of hardware used to attach the side rails of a bed to the headboard and are designed to draw tighter with more downward pressure. They don’t loosen with use but get tighter. And then I shaped curved braces that secure the bottom of the leg to the center of the table eliminating any movement along the length of the table.

Once the glue was dry, I began to flatten the top. I do this using a series of hand planes. First the roughing plane then a Jack plane and then the smoothing plane. I especially enjoy this part of the build I think because I am so connected to the wood. It is tactile, I feel humps and valleys, changes in direction of the grain, and the resistance of the wood to being sheared cleanly. I sharpen my blades when there is more resistance than I think there should be, and it is a joy to see the wood easily curl in a new shaving with very slight resistance when the blade is sharp. It is also audible, the plane strokes make a “shushing” sound and the back and forth motion is rhythmical. It is a sound that has been heard for centuries old in wood shops around the world. It is very soothing even though it is very physical. Time seems to pass differently. I recall the first big table I had to flatten by hand – it was actually an altar on the island of St. Croix – and I lamented to a fellow woodworker that I didn’t know how I was going to accomplish the task. And he said matter-of-factly “You’ll do it by hand with your planes. It may take a day or two but so what.” I do all table tops like this with a reverence for the wood and the work. It is very satisfying to see a straight edge laid across the width touching the wood all the way.

With the top flat and sanded to 80 grit, it was time to work on the bottom. The table without legs was heavy. I could not lift it up onto one side to balance it on the edge, walk around to the other side and ease it down. My overhead chain fall came to the rescue once again.  I fondly refer to any leverage aid as my buddy Archimedes. Once flipped I repeated the process used on the top side.

With the bottom smooth I began to lay out the position of the legs. The legs are made of Sapele two layers thick. They are substantial, giving the appearance of effortlessly supporting this massive top, and they also are graceful and soft, not just utilitarian. One can casually lean on the outer most edge (as one might do when engaged in a conversation) and the table will not tilt or topple or move for that matter. I sat on the edge as a test. I am not aware of any rules for the placement of legs. I set them and stepped back to look, moved them a bit and stepped back to look, repeat, repeat and repeat until it looked appropriate, balanced, and, in other words, right. Mortising in the parts of the brackets that secure the legs in place is a matter of careful measuring and labeling. The mortise cannot be too deep or the hooks will not catch. They cannot be too shallow either as the hardware would be higher than the wood and the leg would not contact and tighten up to the top. This part involved a lot of trial and recutting.

Once the legs were secured in place, I had the parameters for the braces for the legs. I made a pattern out of plywood set it in place and looked at it. I made a second pattern because I did not like the first curve I had made. I transferred the pattern to a piece of Sapele, cut, sanded, edged and then mortised for another hanger set. I used a screw to secure the brace where it contacts the top.

I sanded all the parts and the bottom of the table to 150 grit. After a good cleaning I began to apply polyurethane finish. I used 4 coats on the legs and braces. When it was dry, I assembled the legs and braces for the final time and, with Archimedes help, turned the table over to rest on its legs. After sanding the top side to 180 grit, I began to apply the coats of finish to the bottom and top. If I had applied 4 coats of finish to the bottom before turning it over, the unfinished side would have lost or absorbed moisture much faster than the finished side. The top would then cup over its whole length. I applied coats to both top and bottom at one time. The first coat always reveals any scratches that I have missed and I sanded them clean. I applied 3 more coats with light sanding in between coats. Before the final coat I sanded the entire top with 400 grit sandpaper to smooth out as many imperfections as possible. I sprayed on the final coat as carefully as possible.

Christian and John also asked if I could create some lights for over the table and I was not coming up with anything. When John and Christian stopped by to check on the progress of the table, John asked If I could do something with the shape of the braces. That was the beginning of two light fixtures that work perfectly over the table.

I rented a 20 ft. Ryder truck and backed it up to the open doors of my shop with the I-Beam rail reaching well inside. Archimedes and I moved the table on board and secured it along with the lights, dollys and a few tools.

Chris and I transported the table as carefully as possible to Pittsburg. The road conditions were not ideal and I cringed more than a few times. Once we arrived and I saw all was well, I began to relax. Christian had arranged for some young, strong students to make the unloading and setting of the table a breeze. Christian and John were ecstatic with the way the table turned out and we christened it the very next day. Chris and I were treated to a couple of days of delightful hospitality before renting a car and returning home.