A Table For Dick and Sherry

Posted on Dec 10, 2020 by Philip Hultgren in Uncategorized | 1 comment 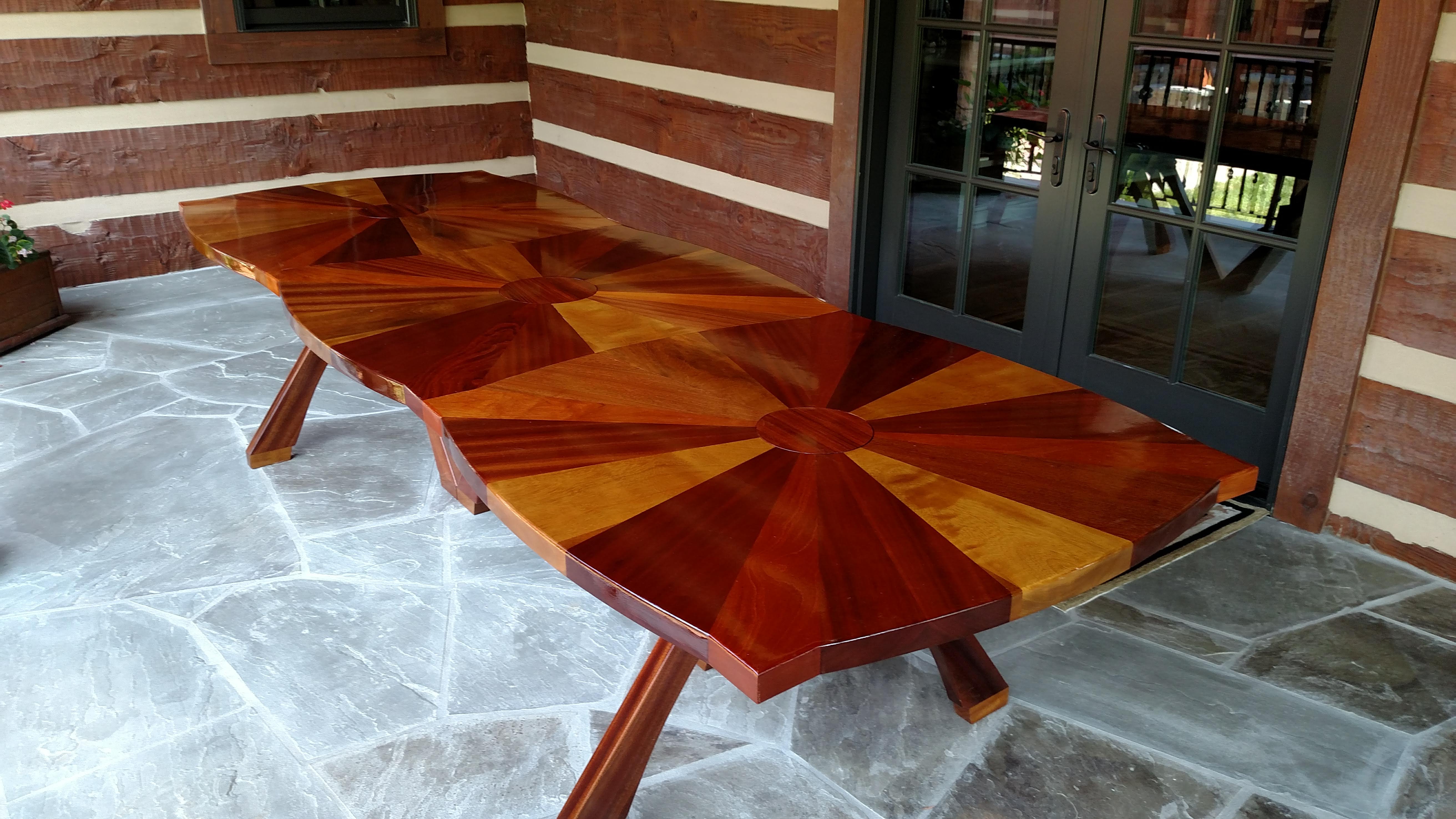 A while ago, our neighbor Dick from across the street dropped in to ask me if I could build them a table. I had walked outside to greet him and, after his question, invited him inside our home so he could judge for himself whether or not I was the right man for the job. He decided I could handle the commission and began to describe what he wanted. “It looks like a fan with three sections,” he said. Eventually he produced an article with picture from an old issue of Garden and Gun. The picture was taken from a second story balcony looking down at the table as part of a whole court yard scene. He told me more than once how taken he was with this table ever since he saw it.

Dick invited Chris and I over to see where he and Sherry, his wife, would like to place this table. They had just finished building a 7 thousand SF log cabin and sought to put the table on one of the side porches; a porch that is not enclosed, not screened, not heated nor air-conditioned. That means the table will be exposed to the variances of weather (mainly humid to dry), insects and ultraviolet exposure. This is, of course, a very different set of parameters to work with than a table that remains inside. So we took measurements and determined the size of the table based on the size of the porch.

I drew a table top based on theses dimensions and with the requisite “fan” shape. When Dick saw the drawing, I swear there was a tear in his eye. So I had cleared the first hurdle, that of understanding just what the client wants. Next was choosing the right woods.

There are two primary characteristics for wood that will remain in a protected but unconditioned atmosphere. Stability is the first, in that there is very little moisture absorption or evaporation. Insect resistance is the second important consideration. Wooden boat builders have experimented with the world’s woods for centuries to find the best woods to solve the issues of stability and insects. So my work was considerably eased by relying on this wealth of knowledge to inform my wood choices. The four woods that I settled on also happen to be rot resistant, but that was a minor consideration as there would be only occasional contact with water. The woods I chose are Honduran Mahogany (Swietenia macrophylla), Sapele (Entandrophragma cylindricum), Iroko (Milicia spp.), and for the center support Bubinga (Guibourtia spp.). None of these woods are endangered.

With limited resources locally, I searched for tropical hardwood dealers in the area and found World Timber Corporation about 4 hours north and east. They pulled my order and had it waiting for me when I arrived. They even covered the wood with cardboard to protect it for the four hour drive home in full sun. A few of the 2” thick boards weighted well in excess of 100 lbs.

The next step was making patterns in ¼” plywood. There are 16 pieces to each of the three sections. The four corner dart-ish pieces were all the same so one pattern would serve for all. The three pieces that comprise the sides and ends of each section were slightly different. With the patterns made I could begin to cut out the table top pieces.

To cut the pieces as accurately as possible, I made a jig for my table saw that allowed for precise angle adjustment. Each triangular piece needed to be cut from the center of the board in order to keep the grain of the wood running straight down the middle of each piece.

Gluing triangles together proved to be the next challenge. How does one put equal pressure on adjoining sides of angles? The answer is with another jig. With the two outside edges locked in place, pressure can be placed on the center wedge to create a tight fit.

Wood moves. When the air is dry (winter), wood loses some of its moisture. When the air is humid (summer), wood absorbs some moisture. Woodworkers have to adapt their designs to account for movement. As I mentioned, I chose woods for their stability, but they still move. Just so, I left one joint in each of the three sections without glue. The center circle is not glued either so the tops are free to expand and contract much like a folding hand fan.

The legs have a hint of the equestrian. They are attached to a square steel post made specifically for this table. I would guess the table weighs 300 lbs. based on the grunting of four men who lifted it. I finished the table with 6 coats of marine varnish.

This table was a joy to make. A large part of that joy was the many challenges. The new owners are delighted with it.