Posted on Aug 28, 2020 by Philip Hultgren in Uncategorized | 3 comments 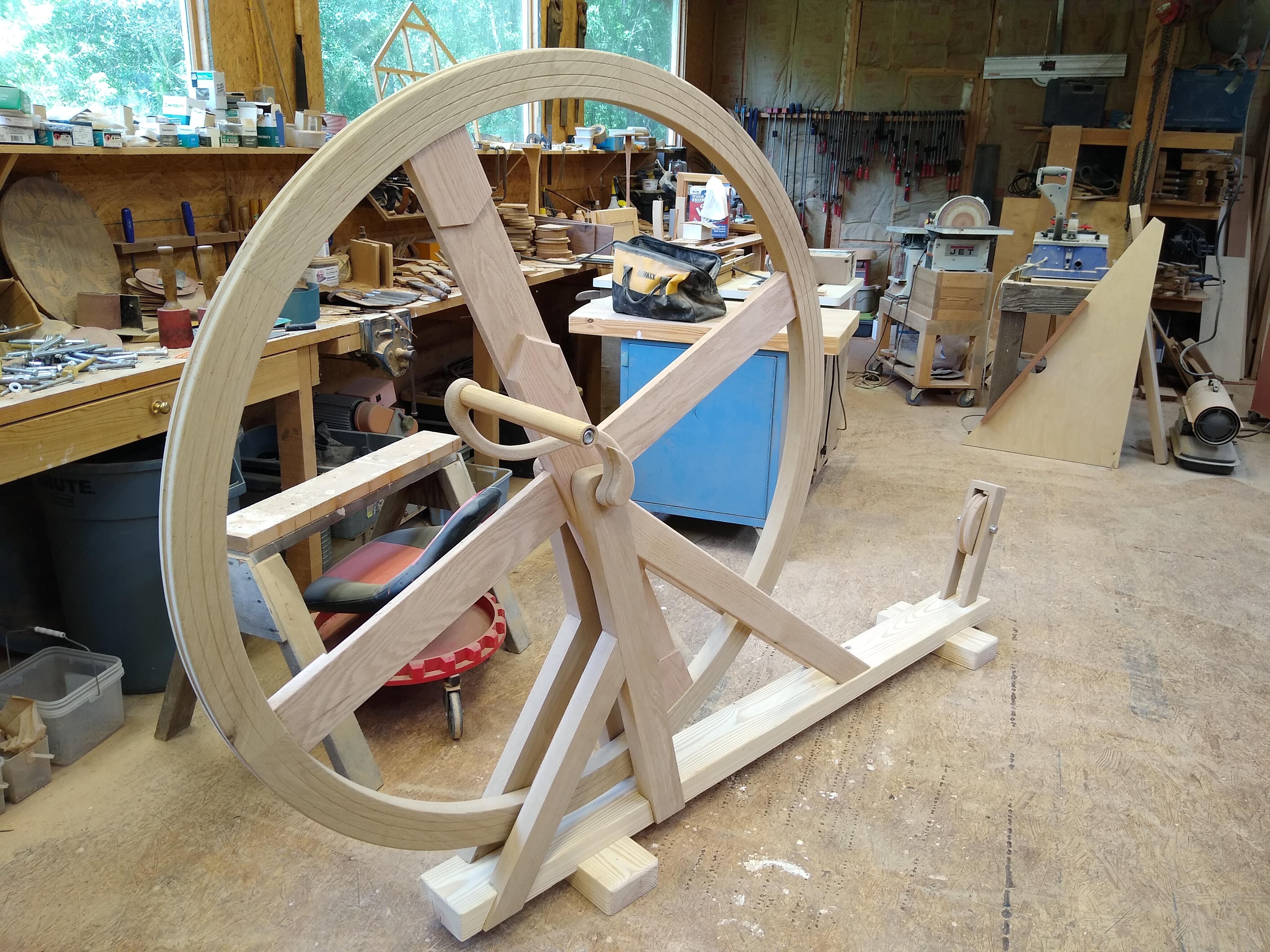 While recovering from one of my eye surgeries, I happened upon a You Tube video of a wind-powered sash saw mill in the Netherlands. I was mesmerized by the way the Dutch had reached out into the wind and captured a little bit of energy to use. Boats had used the wind to move about for centuries, but with sails on a wheel these people had coerced some of this invisible power into their mills, redirected and molded it into a steady reciprocating motion (up and down), in this case saw blades that steadily chewed their way through logs to create boards. And even though the wind was not absolutely reliable, it was never used up, there was no waste, and it cost nothing to transport it. I was witnessing technology that has been around and used for centuries. It was green before “green” was stylish.

Since I have this abiding fondness for woodworking and especially hand tool woodworking, I began to dream of how to duplicate this very cool machine. Recognizing the geographical differences between South Carolina and the Netherlands, primarily the absence of constant wind, I discovered that water was the energy power of choice in the 18th and early 19th century. A little more research revealed that water-powered sash-saw mills (the up and down motion) were ubiquitous at this time. In 1840, the 6th US census counted 31,650 water-powered saw mills! This simple but brilliant borrowing of the energy of water in its natural flow to the sea to create reciprocating motion fascinated me and I sought more and more information about what was as common then as cars are to us now.

But where could/should I build such a delightful relic? It seemed obvious that Camden would have had one soon after the first campsites were established and research demonstrated this to be the case. I thought that building a water-powered sash saw mill at Historic Camden would be the perfect match. Its working demonstration would be a terrific draw to visitors (there are very few working water-powered sash-saw mills anywhere to visit) and the by-product (cut wood) could be used to build authentic habitats for the other trades that would have existed at Camden in the 18th century such as the cooper, furniture maker, tinsmith, wheelwright, etc. Historic Camden would become much more of a living history museum than a couple of battle reenactments every year.

The research was captivating. I found multiple articles on all aspects of water-powered saw mills. And, as one might expect, the more I learned, the more questions I had. There came a point, nevertheless, when I came to question the viability (a fancy way of saying my sanity) of planning anything. So I talked with a few friends who have roots here and whose opinion I trust. They roundly encouraged me to keep working on the project. Dennis suggested that I go to a meeting at Historic Camden concerning its future.

The meeting, as it turned out, was about the up-coming new programs for the year. These included a full-time blacksmith, a working brickyard, rope making (called a rope-walk) and a potworks. Part of the handout read:

Beginning on Memorial Day 2020 weekend visitors to the Potworks at Historic Camden will hear the story of John Bartlam, a Staffordshire master potter from England, who move to Camden in 1772 and was the first tradesman to manufacture porcelain in America.The potworks will open in 2020 with a historically correct replica of an 18th century throwing room with a hand-turned potter’s wheel…

A picture was included.

This was the only picture.

Cary Briggs, who was leading the meeting, asked the half dozen of us there if anyone could make this 18th century machine to power a potter’s wheel. I said I could. It’s funny how things happen. I went to this meeting to begin inquiries about the possibility of building a water powered sash-saw mill and left having agreed to do something very different.

And so began quite a challenging project. There were no measurements of any of the parts. Did I mention that there was only one picture? Apparently there are only three of these pottery wheel sets left in the world. These were found everywhere in potters’ workshops a couple of centuries ago, but no longer. The internet, which invariably produces millions of hits to any search in .04 seconds, provided very little information and nothing useful. I was left to my own devices and did my best to design and build with an 18th century mind.

The craftsman who would have built one of these years ago would not have built it with the same care as he would have put into a piece of furniture. It was a tool for a workshop. That said, he would have employed the same furniture making techniques for joining pieces of wood together such as dovetails, box joints and mortise and tenon. Wood screws would not have been used. They were handmade and so were more precious than nails, which were also handmade. Nails, at that time, were considered so precious, it is said, that disused buildings were burned down so the nails could be salvaged. Another thing I had to consider in the construction of this machine was that it had to stand up to years of constant use and, abuse. I would guess, the one forced or employed to turn the wheel cared not how he treated it.  In sum then, I had to make this drive wheel from scratch (rough lumber), without measurements, using only traditional 18th century joints and glue, strong enough to last and to work in a manner only guessed at from a photo. It was a tall order but the challenge, I admit, I relished.

All the wood I used would have been readily available to a craftsman in South Carolina in the 18th century. White Oak made the drive wheel heavy, smoothing out some of the uneven jerking of hand-cranking. I shaped all the wheels by hand so that there is some resemblance to what was probably typical – that is, not perfectly round but close enough to work properly. I conferred with the Potter, Marty, to make the potter’s station as comfortable as possible within the limits of what we needed to accomplish. The “wheel head” – the disk on which she works the clay- is aluminum and decidedly not 18th century and we hope to find one that is more probably authentic such as cast iron or stone. But for now it is what we have. I finished building the parts within days of the proposed VIP gathering to demonstrate the “Potworks.”

When we brought the pieces to the site (a 19th century log house on Historic Camden’s property) I still didn’t know if it would function as proposed. I had to cut and splice a length of hemp rope creating a continuous loop without knots. That done we had to secure the two pieces (drive wheel and potter’s seat) in a way that kept tension on the rope so that neither the drive wheel nor the potter’s wheel slipped. I drilled holes in the wooden floor and inserted wooden rods (called “pins” in timber framing) so as to keep the two pieces apart. We started cranking and Marty was able to throw a pot. Here is a video of what it looks like. That’s Dennis turning the crank. It really works.