Posted on Jan 20, 2019 by Philip Hultgren in Uncategorized | 0 comments 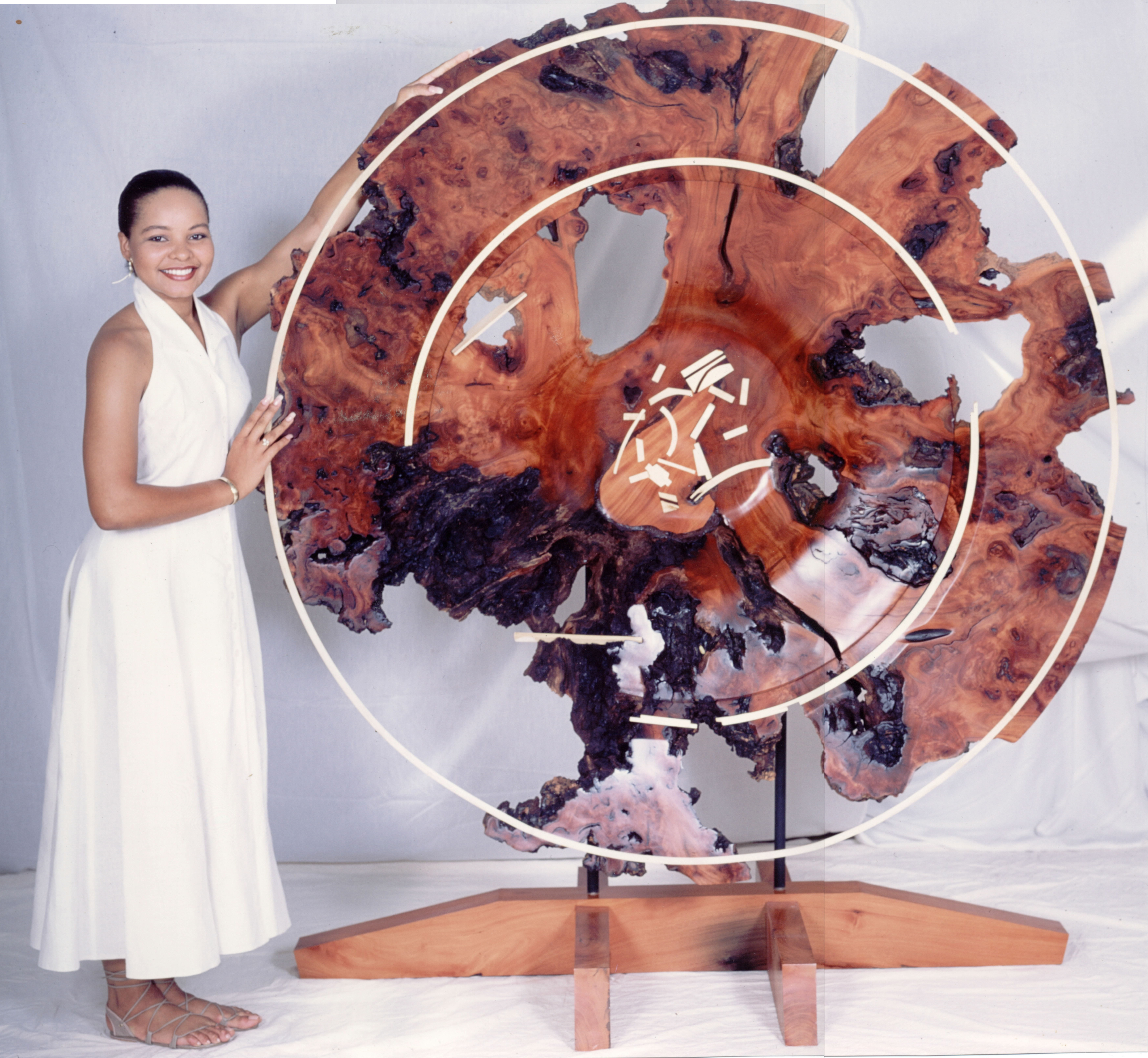 Hurricane Hugo hit St. Croix, US Virgin Islands, on Sept 19, 1989 as a category 5 hurricane. It went directly over us. The island turned brown from salt water spray. Many West Indies Mahogany trees were killed and left either standing dead or, in the case of this particular one, uprooted. This one fell along side the Lutheran Church in Christiansted. I saved it all including the root which was spread out in dish shape. It sat for years like an ear on the earth before I had the notion of turning it.

I had read an article about someone who had built his own lathe to turn large chunks of wood and decided to build one of my own.

The lathe would turn a maximum of 8 feet in diameter and with the truck transmission, it had four speeds and reverse. An overhead chain fall lifted the heavy chunks of wood until I could slide them on the shaft. I calculated the weight of Sui Generis at the start to be 1000 lbs. That weight made it very difficult to get to the lathe to begin turning, but I had my friend Archimedes to help once again.

It took all of my equipment and I had to even employ my truck jack to get it into my shop.

Once it was mounted I began to shape this root. I learned very quickly that even at the slowest speed (97 rpm), the outer edge was traveling very fast and the chips that my chisel cut away were impacting my arms rather painfully. I was even getting cut from flying chips. So I donned a welder’s leather cape in addition to my leather apron to give a little protection.

The root was buttressed. That is, the actual wood was not flat but consisted of folds all around the trunk, a living sine wave as it were. As I cut through the bottom of the wave gaps appeared making the turning less and less like a bowl.

And then to my initial horror a large chunk of the root came loose and fell away. I had lost the “circleness” of the whole project. That did, however, lead me to insert a “visual circle” out of Holly which then made this piece so much more interesting than just a large turning.

The Holly was flexible enough to bend into the slot I had cut on the outer edge. Thinking I could repeat this feature closer to the center, I cut another slot and attempted. The curve proved to be too tight for a full circle of Holly but a partial circle did work. I then used a scattering of pieces in the center.

This was the largest turning I had ever done. It is 6 feet across. I have done several turnings that are 4 feet across and with a little effort I can move them and place them on pedestals, stands or tables. Sui was too big to move by hand or even four hands. I estimated its weight to be around 400 lbs. For the six months I worked on it and looked at it on my lathe, I came to realize that this was the best way to view it, vertically. Just so I had to create a stand to hold it that way.

The stand had to be very sturdy, but not clumsy or industrial. It needed to compliment the piece not distract from it. I drew inspiration from George Nakashima with whom I was very taken at the time. The upright posts are solid 1″ steel with a slight bend backwards so that with the forward pull of its weight, Sui Generis stands almost perfectly vertical.